1: Describe the location of the Salton Sea. What is the climate and geography of the area?
The Salton sea is located directly on the San Andreas fault. It is shallow and occupies the lowest part of the Salton Sink in the Colorado Desert of Imperial and riverside counties in Southern California and is surrounded by mountains except for in the south . The climate is  warm and the rain only reaches 3 inches.

2: How did the Salton Sea form? Explain what role humans played.
The California Development Company  build irrigation canals from the Colorado river into the Salton sink. Within 2 years there was a blockage due to silt, in 1905 heavy rainfall and snowmelt caused the colorado river to over flow creating 2 rivers, the New River and the Alamo River which diverted flood water into the Salton Sink

3: What is the present condition of this body of water? How has it changed over the last 25 years? Why?
Salton Sea is maintained by runoff from agricultural irrigation in the Imperial/Coachella valleys. It has changed in salinity over the last 25 years. Water is lost due to evaporation which leaves salt behind raising the salinity.

4: Describe several ways the Salton Sea has altered the ecosystem of the region. Explain the stability of that ecosystem. How is it changing over time?
The ecosystem was once full of biodiversity.  It has increased salinity and now looks like a deserted wasteland. There is no stability of that ecosystem. Fish species and bird species are dying off quickly. There is a 1% raise in salinity annually.

5: Outline 3 environmental and 3 economic reasons the Salton Sea is important.
Environmentally, It was home to over 400 species of birds and to many species of fish and plants
Economically it provided Recreational activities such as fishing

7: Compare the similarities and differences between the Salton Sea and Lake Chad in Sub-Saharan Africa. (Make a VENN Diagram) 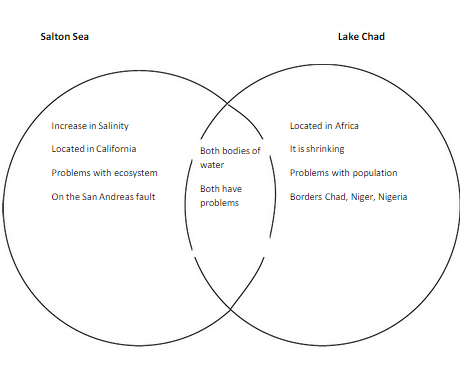 1: Where is the Aral Sea located?
The Aral Sea is located in Kazakhstan and Uzbekistan

4: Why was the water supply to the Sea diverted?
The water is used to irrigate the desert region surrounding the Sea in order to favor agriculture rather than supply the Aral Sea basin.

6: Describe 3 negative environmental effects of the fading of this sea.
The receding sea has left huge plains covered with salt and toxic chemicals, leaves population with with lack of water and health problems like cancer and crops in the region are destroyed by salt being deposited onto the land.

7: Describe 3 economic impacts in the region because of the water diversion.
Fish catch has been devastated, fishing towns have turned into graveyards and fish boats lie scattered on the dry lands that was once the Aral Sea.

8: How is the situation of the Salton Sea similar to the Aral Sea? How is it different?
Similar- problems have been caused by humans, increase in salinity and toxins. Decrease of biodiversity.
Different- Salton Sea has been shrinking because of Soviet Union diverting the two main sources, Salton sea is increased in salinity because there is no way for the water to flow out.

9: How would you describe this region today, other than as a “sea”?
Dry and salty lands surround the sea. Severe desertification and pollution.

11: How can the Aral Sea be realistically rehabilitated?
Improving quality of irrigation canals, installing desalination plants, use fewer chemicals and installing dams to fill in the Aral Sea

12: Compare the situation in Mono Lake, California with that of the Aral Sea
• How did the Mono Lake problem arise?
Los Angeles began diverting water from Mono lake to meet the needs of its growing population

• Describe 3 ways the problems of Mono Lake are similar to those of the Aral Sea
Water was diverted for human use, loss of fish species and both have severe effects on the area surrounding the lake and the sea.

13: Summarize the proposal and actions to remediate Mono Lake
There is a committee working to save Mono Lake from destruction. They educate the public about the natural environment and how to use water wisely. California Fish and Game service attempted to put fish back into the lake. In 1994, California State Water Resources Control Board ordered the DWP to raise the sea levels of the lake to above 6932 feet.

4: How do the individual states use the water? Who are the top five consumers of the water?
The water goes through dams that send water through aqueducts which then sends the water throughout the seven states. California, Colorado,Arizona, Utah, and New Mexico.

5: Describe some of the conflicts that arise over water use. How are they usually resolved?
Conflicts include when there is an endangered species, which leads to arguments over how much water one state should use over the other. They are resolved through conferences to agree the best places to use the water.

6: How are conflicts between public and private use managed?
The Colorado River Salinity Control Program

7: Serious differences with Mexico exist concerning the amount of water the Mexicans receive from the river. Explain why this problem exists and what can be done to work out this dispute between the countries.
The amount of water in the Colorado River has dropped, meaning there is less water in Mexico. This problem exists because we are using more water than is being remediated. What can be done is that we can let the Colorado River remediate and then continue use but reduce or limit the amount of use.

8: The Tigris and Euphrates Rivers cross international boundaries in their path to the Persian Gulf. Why is this problem potentially greater than the one that exists on the Colorado River?
The countries in these areas require more water than other countries because they are located in arid regions. It causes international relations to be unstable.

10: The Three Gorges Dam on the Yangtze River is very controversial. Why is this dam being built?
The dam was being built to hold back flood water than can kill millions and also to supply electrical power to the people around the region.

11: Describe how this dam differs from dams on the Colorado River, such as the Glen Canyon Dam or Hoover Dam, with respect to:
• the disruption of human life
• impact on the environment
• archaeology
• local culture and natural beauty
The dam forces millions of people to relocate and there is a reduction in biodiversity. 300 fish species cannot move upstream, compared to the 4 species in Hoover Dam. In the 3 gorges, 44 archaeology sites would be affected, if the sites in the Hoover Dam were to be flooded. The 3 gorges decimated natural beauty and destroyed important cultural artifacts.

a: Describe and discuss two environmental issues associated with water diversion projects. Identify two benefits other than agriculture and recreation that people derive from that system of dams.
The first issue would be reduction in water level. There is not enough water therefore bodies of water can't replenish themselves. There is also the issue of high salinity which is the result from reduction in water levels. This happens since as water evaporates salt is leftover causing increase in salinity. Two benefits is electricity which gives us power to run our homes and other things and to prevent water shortage during a drought since dams hold water when droughts occur.

b: If there is a shortage of water, decisions will have to be made as to whether the water should be diverted to urban areas, agricultural areas, or natural ecosystems. Make an argument for diverting water for urban consumption, and an argument for permitting the water to flow to natural areas.
Water should be diverted to urban consumption since without water we cant go on with our normal lives. We will lose the ability to provide water in our homes. Water is a big part of our lives since urban areas are the most populated. We need to divert flow to natural areas since ecosystems play a big role in our lives. Bodies of water naturally replenish and if used at good rates we don't have to worry about running out of water.

d; Identify two possible environmental consequences of climate change on the hydrology of the Colorado River system.
If there is an increase in temperature then water levels will decrease and water will evaporate but if the temperature decreases the river will overflow and flood surrounding areas.