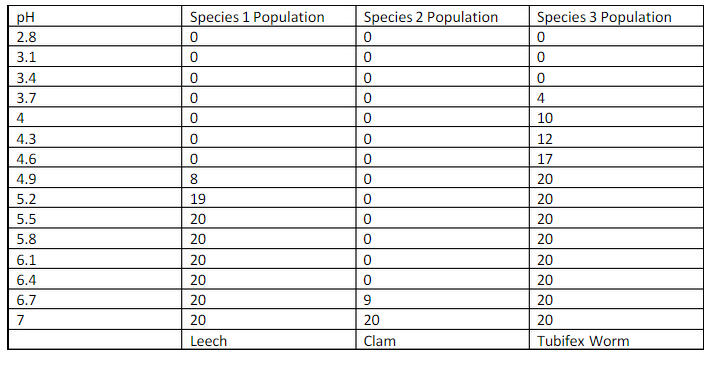 2: Describe how acid precipitation affects ecosystems.
When acid precipitation occurs, the acid would get into the water and acidify it. When the water gets more acidic, the shells of the clams can dissolve due to the more carbonic acid in the water. More clams would die, meaning that there is less food for the little fish to eat. Without any clams for the small fish, they would die and that means no food for the bigger fish. The bigger fish then die, and us humans don't have any fish at all to eat.

4: Suppose you are an ecologist studying the effects of acid precipitation of plant life. Describe an experiment you would perform in order to determine which plant species would be an useful indicator species for acid rain pollution.
I would use 3 species of plants. Each species has one control and one experimental. The control would have water with a neutral pH. The experimental would have a pH of 5. I would place the plants in the water for at 30 minutes. When the experimental plants are checked I would observe if the plants behavior has changed or not for example if the petals are clumped together or are spread apart. The plant that shows any obvious signs would be a great indicator indicator species for acid rain pollution.